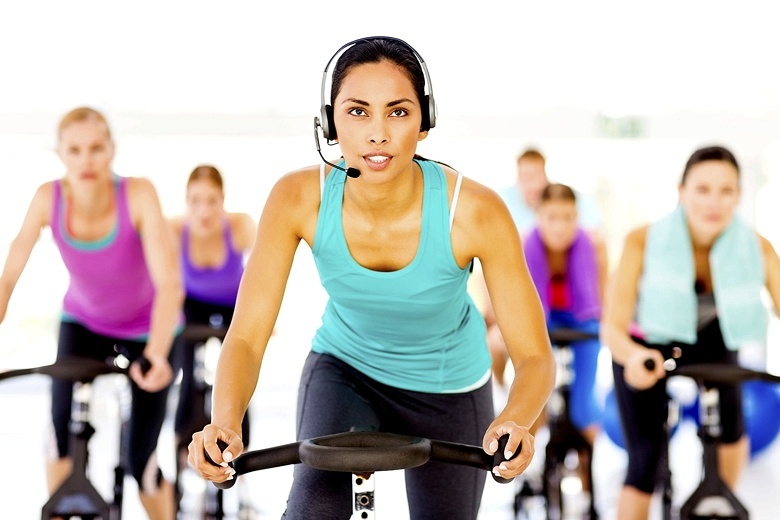 Are you ready for the screen of shame?

The latest fitness trend sweeping the States ensures that you can’t slack off in classes, as your heart rate is displayed for all to see.

No matter how tough a gym class, there is usually a chance to take your foot off the pedal, to have a short breather before re-booting at top speed. Most of us have been guilty of exer-skiving, hoping that the instructor won’t notice we’ve taken a break as everyone else powers on. But the latest workout trend attempts to eliminate any opportunity for slacking off. At boutique studios such as Heartcore and Fitness First’s glossy new Beat club in Charing Cross, London, as well as the big chains, demand is soaring for classes that not only keep tabs on how much (or how little) effort you are making, but project the results on to a real-time screen of shame.

What the classes have in common is the use of heart-rate monitors that meticulously track what’s happening to your body as you exercise. It’s a phenomenon that has taken hold in the US, where classes such as Orangetheory — which uses weights and cardio, and claims to burn 1,000 calories in a 60-minute session — are selling out at chic studios in New York and Los Angeles within minutes of being listed online (it’s available in the UK at David Lloyd gyms). It’s a similar story here. A second branch of Beat, where the focus is on heart-rate classes, is due to open shortly, with more to follow around the country, and the FitRX class I have managed to squeeze in to at Heartcore, Fulham, is becoming the hottest ticket in town for those who want to ramp up the fat-burning.

While formats vary — some classes use treadmills, indoor bikes and rowing machines; mine centres on the use of TRX suspension devices (straps affixed to the ceiling that allow participants to use their body weight to complete exercises) and free weights — the principles underpinning them are the same. In each case, participants are fitted with heart-rate monitors, calibrated for their age and weight. The devices are then linked to a digital screen that displays the heart-rate “zone” reached throughout a 60-minute session. Gok Yesodharan, our instructor and a man who looks as if he was born into the role of maximising glute-firming exercises, says that the idea is simply to spend as little time in the blue (60-69 per cent of your maximum heart rate) and green (70-79 per cent) zones during the session and as much time in the yellow (80-89 per cent) or, preferably, red (90 per cent) zones as possible.

“The more time you spend in the red zone, the more of an afterburn effect you will get,” says Yesodharan, as he leads us through a gruelling, high-intensity circuit of core exercises on the TRX, squats with dumbbells and burpees. “It means you are pushing yourself to the point that your metabolic rate will be raised for 24 to 36 hours after you finish.” We are each given a class name (mine is Tiger), which promises some level of anonymity, although you quickly work out which moniker relates to which set of data flashing up on the wall in front of you. Of course, heart-rate monitors are nothing new. Hardcore runners and rowers have been avid users since the early Nineties and, more recently, gyms have been using them to track the individual progress of members. But the boom in wearable devices means that technology has advanced a lot. The devices are not only more accurate, but provide more reliable feedback and can be linked via Bluetooth to laptops and phones.

Fitness-minded friends are raving about them. I’ve never been much of a fan, preferring to rely on the old-school method of assessing how much effort I am making: if I’m tired and my legs and core are on fire, then I’m probably working hard enough. There always seemed to be something quite clinical about relying on an electronic gadget to determine your level of effort. Besides, I know people who have become obsessed with their monitors to the point where they almost dictate their lives. But I’m prepared to be swayed. What does John Brewer, a professor of applied sports science at St Mary’s University, Twickenham, make of them? “They can be useful, but only as a guide and aid to training,” he says. “They should not dictate a workout. It’s very easy to become fixated by heart-rate data and, eventually, that will take the enjoyment out of exercise. They are designed to monitor, not control, what you do.”

Still, ten minutes in and I can see how they might help. Despite pushing myself to what I think is my upper limit, my monitor begs to differ: I am rarely budging out of the green zone. As everyone else sees their monitor flash red, I am alone in loitering at the lower end of the effort scale. “Work harder, harder,” Yesodharan urges, although I am already digging to the bottom of my reserves. I’m beginning to think that perhaps I am deceiving myself. Last year, a study in the journal PLOS One by Canadian researchers revealed that most people tend to overestimate the intensity with which they exercise. In the UK, government guidelines recommended that adults do a weekly minimum total of either 75 minutes of vigorous activity (about 77-90 per cent maximum heart rate or a level at which you can’t say more than a few words without pausing for breath) or 150 minutes of moderate intensity exercise (about 67-76 per cent of your maximum heart rate, loosely defined as a pace at which you can talk but not sing).

Yet when the team from York University in Toronto monitored the heart rates of a group of volunteers asked to walk or run on a treadmill at a pace they felt to be alternately light, moderate or vigorous for 3 minutes at a time, they were found to be way off the mark. Not many managed to raise their heart rate above 65 per cent at what they thought was a “moderate” pace and even fewer reached 75 per cent of their maximum heart rate when asked to run vigorously. When walking at a “light” intensity, most failed to push themselves beyond a level they would doing very easy stretches. Given that I tipped into the red zone only momentarily, yet felt as if I was fit to fall, could that be me?

Before using any monitor, you need to identify the individual target rates at which you train. There are myriad ways of doing this. In the FitRX class, a formula developed at the University of Missouri is used to calculate maximum heart rate as 206.3 (0.711 x age). Another popular method — 211 minus 64 per cent of your age — is recommended by bodies such as the American Heart Association. For me (I’m 46), my maximum heart rate works out at about 181 beats per minute, meaning I’d have to be hitting 162 beats per minute to reach the red zone. Professor Brewer says that heart-rate monitors have their limitations. Most are set to population averages and, unless you invest in your own device, may not provide an accurate target. “Your maximum heart rate varies according to your age, your fitness level and environmental conditions,” Professor Brewer says. “Studies have shown how everything from sleep and stress levels to temperature in the room can be enough to throw readings off kilter.”

John Greatwood, a Beat instructor at Fitness First, says that you might also need to recalibrate the settings “if you are particularly aerobically fit for your age”, which might explain my struggle. My strength needs improving, but I run daily, suggesting that my maximum heart rate is possibly higher than for others of my age. It could be that my monitor needs to be adjusted. It’s all getting too complicated and I’m not sure these electronic assessments are entirely my thing.

For those who enjoy data overload, you can opt to receive an email summary of your workout stats after most of the classes, allowing you can keep tabs on longer-term improvements. I’ll stick with it knowing that my body thinks it worked harder than it has done in ages, that I felt as if I was lugging around bricks the following day because my legs were so tired. That’s probably a good enough zone to be in.

A top of the range watch with an inbuilt heart-rate monitor (HRM), fitness tracker and GPS system that is highly accurate. A bit complicated to use, but has it all.

Polar is considered to be a gold-standard manufacturer of HRMs and this is a fantastic entry option. It’s a chest strap rather than a watch and links with Bluetooth and a free smartphone app (Polar Beat) to provide very accurate data.

Widely regarded as one of the most accurate systems (Garmin now uses Mio technology in its HRM watches), the manufacturer claims it is as close to a medical device as you can get. There are none of the added extras that you get with some watches, though.

A personal favourite because it so simple to use that it is almost foolproof. It features a larger and clearer display than most watches so that you can easily see and navigate through it when exercising. The HRM is inbuilt and there are five intensity zones to aim for.

A chest strap monitor that links up with Bluetooth. More expensive models track running cadence and activity, but this one monitors heart rate very well.

This device does it all – measuring calories burned, activity accumulated, heart-rate zone reached and features caller ID. It’s worn as a watch with no chest strap.